This is something a little different from my usual posts. This time I tried to design gadgets that I want to see in a Sci-Fi movie like “Minority Report”. I love the futuristic computer and the UX in the movie, but I was wondering what it would be like if I designed those stuff. So this time I just focused on look and feel of the devices.

“Cobalto”
I don’t remember what the mobile phone is like that is used in the movie, but the glass computer screen remains vividly in my mind and I tried to use as much lucent stuff as possible.

With this deformable metal, you can have either the usual number buttons or an iPod like dial.

LIke one of my previous posts “3D Desktop PC Concept“, it would be fun if this could create 3D objects in the air. With this device, you could see 3D holography on top of a 2D screen, so it would be really exciting.

I happened to be talked to by a Russian TV program, who wanted to feature my 3D desktop concept, so I also gave them this mobile phone concept images and 3D animation. Check out the animation too!

The desktop is also made of a glass screen and a round rim. This is not the one that Tom Cruise makes that hand (or body) gesture to use. This is a desktop PC.

Remember that transparent disk used in Minority Report? It can be also inserted on the screen.

The keyboard has the deformable metal and the keys get flattened when not in use.

I mentioned that I wanted to try a new career on Twitter and I’ve been thinking of becoming a concept designer for movies. I’m finding a way to be one. Do you think I can be a Hollywood concept artist?

By the way, I’ll be out of Japan next week to attend the red dot award ceremony in Singapore, so I won’t be able to post for FFFFOUND! during the week. But I’ll upload some Singapore photos in my Flickr. Oh of course I’ll be tweeting while I’m in Singapore, too. 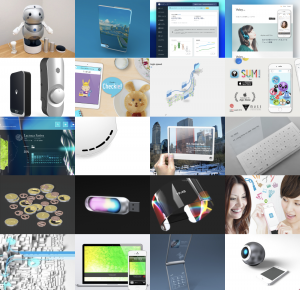